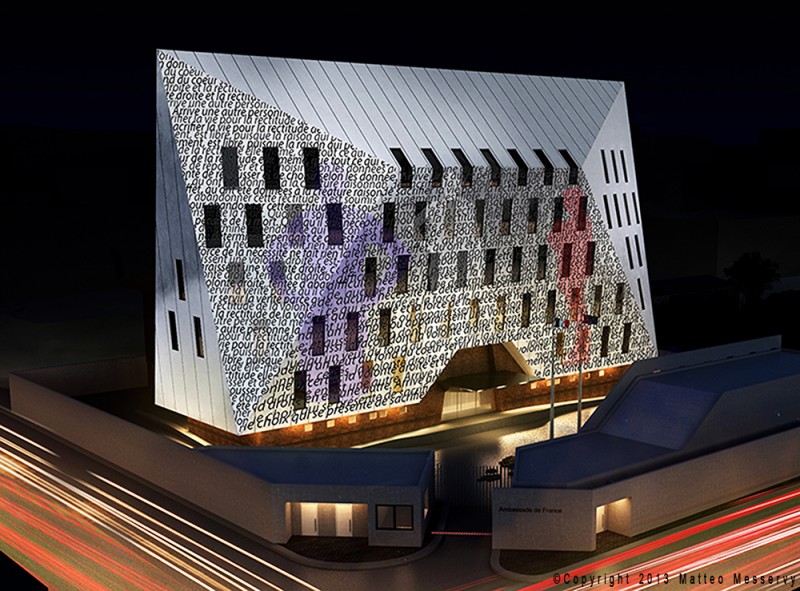 The Embassy of France in Thailand, Bangkok

Following a call to project for the embassy of France in Thailand, the artist and lighting designer Matteo Messervy was among the five designers chosen to present a conceptual lighting design for the french embassy’s new premises in Bangkok.

The building’s prismatic shaped monolithic appearance is accentuated by a sleek, icy white Corian cladded façade. The material and aesthetic quality of  this type of solid surface lenders itself perfectly to colorful and creative designs.

The lighting design proposed by Matteo Messervy is an invitation to travel and discovery. Through shadows and lights , he tries to reconnect with a cultural past through a certain kind of literary genre : travel literature. Texts describing the kingdom of Siam and South east Asia as seen by writers, French explorers and missionaries sharing their experiences on the field.

. To materialize this concept , two types of works would be carried out:

1 . A light-installation in the form of a projection on the building’s main façade representing silhouettes of people reading passages and extracts of literary texts.  : The smooth, angular, white surface of this contemporary piece of architecture provides an excellent platform for the projection of images .

a) First step : a camera would be strategically placed , either in front or inside of the embassy’s compound. This camera would record passers by during the day to transmit images to a computer, that would generate these shadows via a dedicated software. The result would then be projected through a wide-angle beam video projector.

b) second step: At nightfall, a first projector would disseminate texts on specific sections of the façade. These words are excerpts from  a few great travelers literary texts. The desired visual effect would emulate a form of  ”mesh ” or ” chainmail” consisting of letters, which would cover the relevant sections of the facade . . The second projector would broadcast the pre -recorded silhouettes  on the same façade   surimposed on the lines of words.

The colors used for these shadows echo those we have chosen for this concept : blue, white, red , and yellow. The colors are pastel, to create an impression of lightness. These shadows recall travel , real or dreamed , through reading . They describe the course, the movement leading to the discovery of these distant lands so richly presented in these books .

2) Illumination of the building’s base at ground level :

The aim would be to emulate the illumination generated from candles through the use of artificial lighting. A glimpse  at past times when these great explorers and adventurers were still unaware of electricity and had to rely on candles as their main source of light

16 External LED lights would be fitted on the ground, spreading along the building’s dark granite ground-floor base that constitutes the bottom of the façade.

From each LED would emanate a light beam directed from the ground up, towards the ceiling of the recessed alcove , on either side of the main entrance  the building .

A pre- programmed DMX LED controler would create a movement in each beam of light,  like a rhythm, a respiration simulating the flickering light of a candle flame. 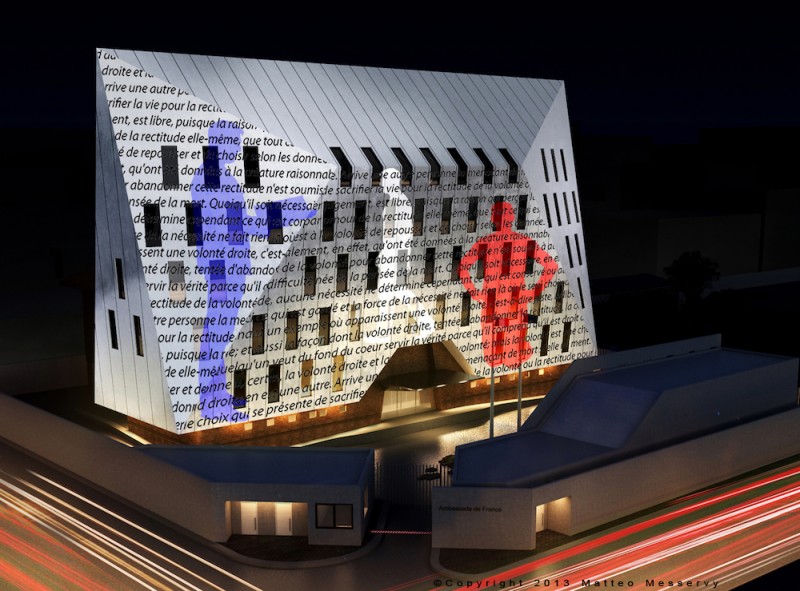 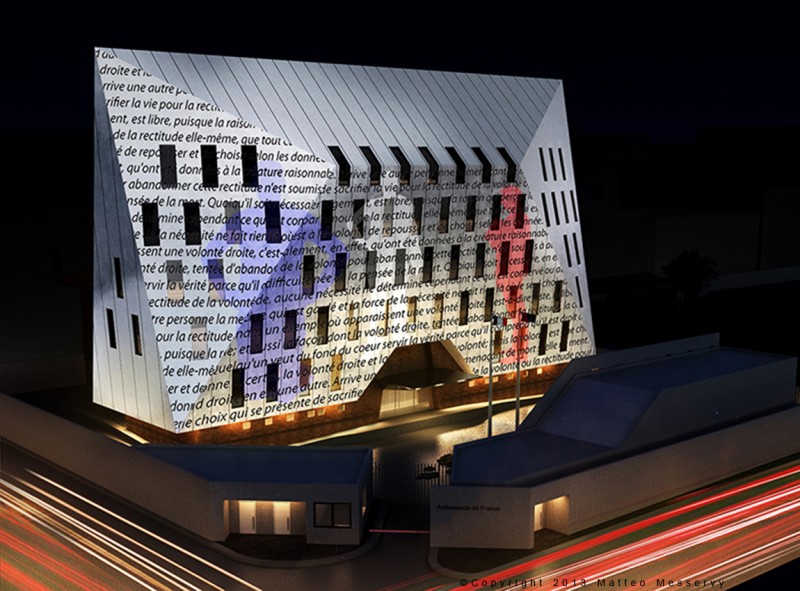 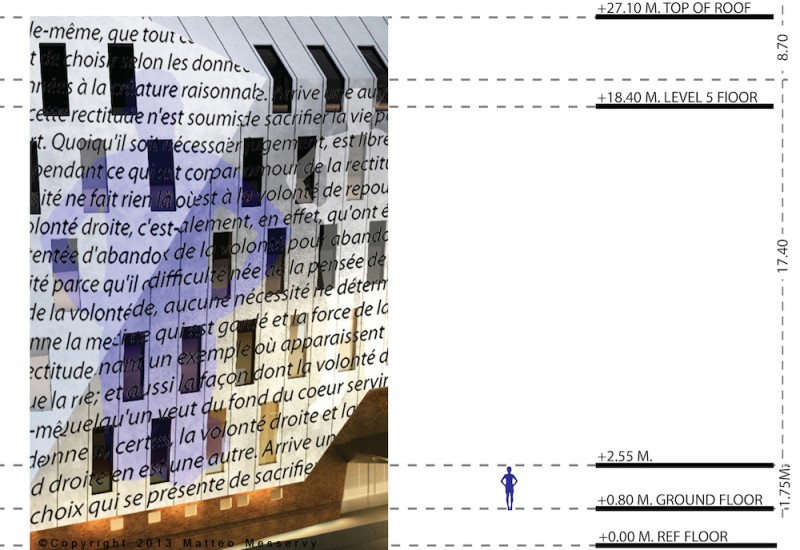 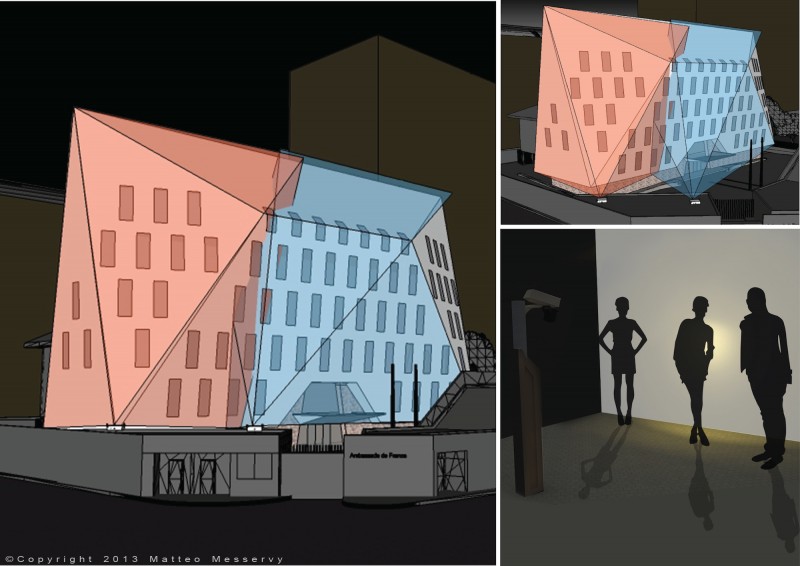